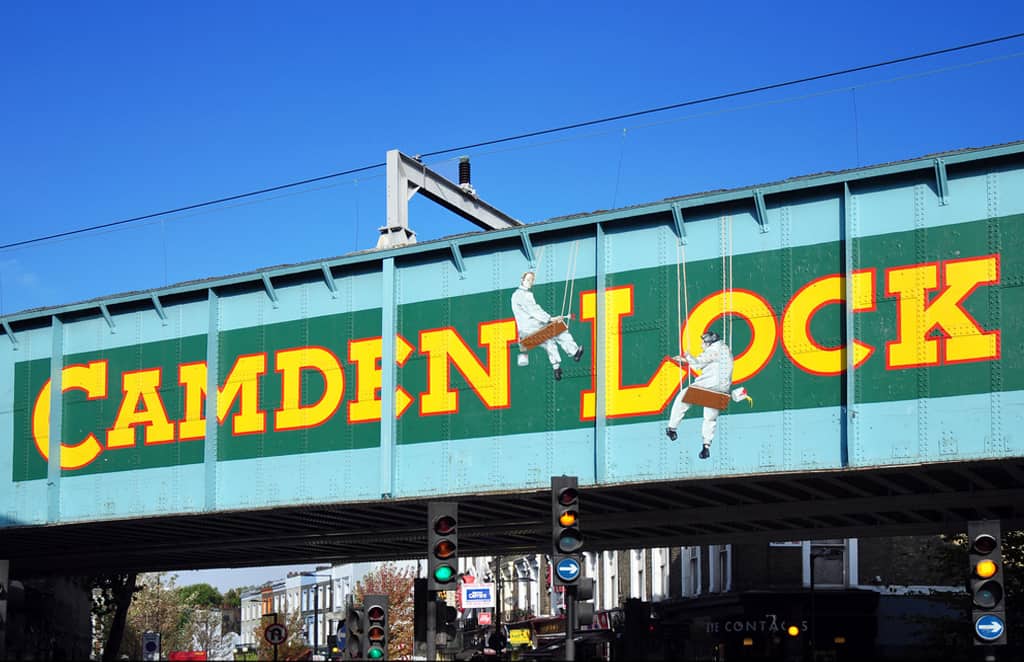 Camden Lock, currently, is a mecca for teenagers and tourists, with 28 million visitors flocking to its second-hand clothes, music record & street food stalls each year.The area was part of the first wave of London gentrification, starting in the 1960s, with the opening of the Roundhouse as a performing arts venue, followed swiftly by the arrival of Compendium Books, which sold political & Avant-garde literature.

A well renowned timber yard by the canal was taken over in the early 1970s by a group of craftspeople, known as Northside Developments Ltd (NDL), and in 1974 they opened the first Camden Lock market, with 16 stalls. The stalls were initially only open 1 day a week, however as popularity grew, so did the opening times, and today the markets are open 7 days a week. 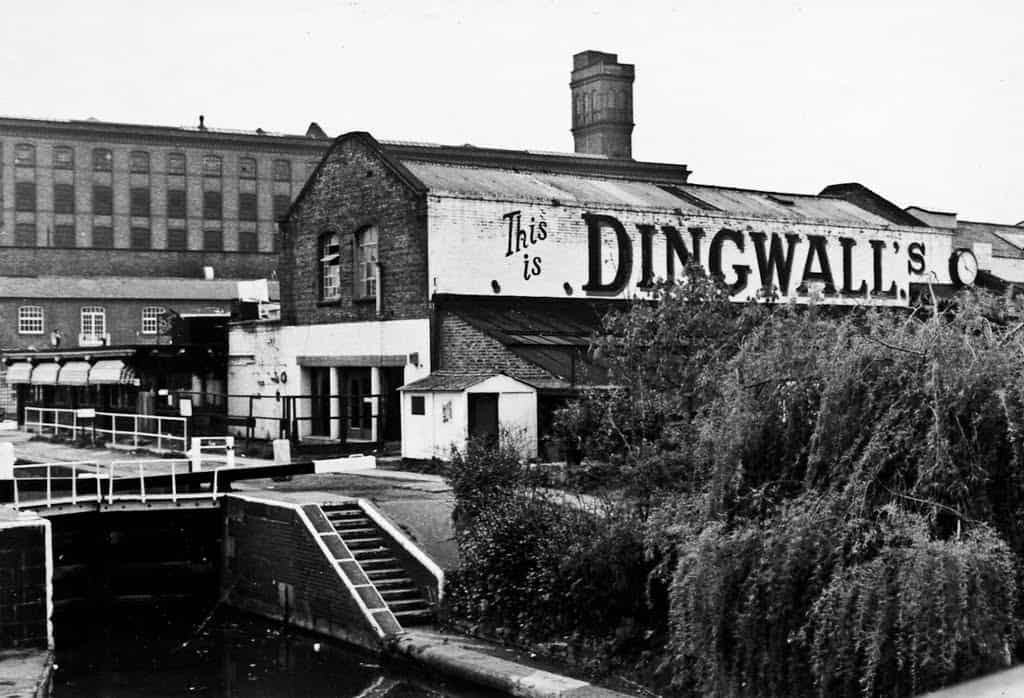 In 1973 John Armit & business partner Tony Mackintosh approached NDL with an idea: to transform an old warehouse along the canal into Dingwalls Dance Hall. Dingwalls, at a time, had the longest bar in London, plus it was open until 2am, unlike most pubs at the time, which closed at 11pm. The venue featured live performances and became famous for showcasing up-and-coming musicians.

As with the street markets, Dingwalls proved very successful, and the Dance Hall quickly became a favourite hangout for members of the Rolling Stones, The Clash, Pink Floyd & many more.

One of Britain’s top punk bands The Stranglers played there years before their first album, and on one eventful evening, the venue hosted Blondie’s debut in the UK – a gig that went down as one of the wildest in Camden history.

As punk legend has it, The Stranglers, specifically bass guitarist Jean-Jacques Burnel, took on The Clash and The Sex Pistols in a punch up outside Dingwalls Venue in 1976. The fight made newspaper headlines in Britain and funnily enough, this little piece of punk rock history was, in part, what put Dingwalls Dance Hall & Camden Lock on the map.

In more recent years the likes of Noel Gallagher, The Strokes, the Foo Fighters, and Mumford & Sons have graced Dingwall’s’ stage. As well as music venues, the markets rapidly expanded and Camden Lock became a popular hotspot for Londoners and tourists alike. As mentioned early, almost 28 million people visit the area each year, that’s over 75,000 people per day.

Camden has had plenty of development over the past 40-50 years due to the success & popularity of the markets and nightlife, and this regeneration is set to continue thanks in part to Property Giant Market Tech Holdings who have plans for a development known as ‘Camden lock village’.

Who are Market Tech Holdings?

Market Tech Holdings Limited is a holding company. The Company owns real estate assets in the London Borough of Camden and operates these assets with a focus on retail, leisure & entertainment.

The entity we call Camden Market actually consists of several markets in the area. In 2014, Market Tech Holdings began buying four of the sites – Canal Market, Stables Market, Camden Lock and Union Street Market – uniting them under a single owner for the first time. Market Tech, owned by billionaire businessman Teddy Sagi, has bought other Camden sites, including a stretch of high street, the Barfly club and the Open University building.

Sources say the riverside development, known as Camden Lock Village, will cost approx. 120 million, and create hundreds of jobs in its construction and maintenance, with more work opportunities from the resulting retail / commercial units.

The area will have a focus on increasing residential, leisure, retail and office properties, whilst maintaining the iconic and historic personality of the area.

As part of the redevelopment & regeneration master-plan, TES Group were appointed to provide power solutions for the first phase of the Camden Lock Village development, which includes residential and high-quality public realm construction.

The project, when complete, will see the village feature eight new buildings between three and nine storeys’ in height, housing a new canal-side market, cafes and restaurants, a cinema, 195 residential units, a food quarter and 9,175sq m commercial space. They will be integrated into the neighbourhood via several new pedestrian routes and open air public spaces. 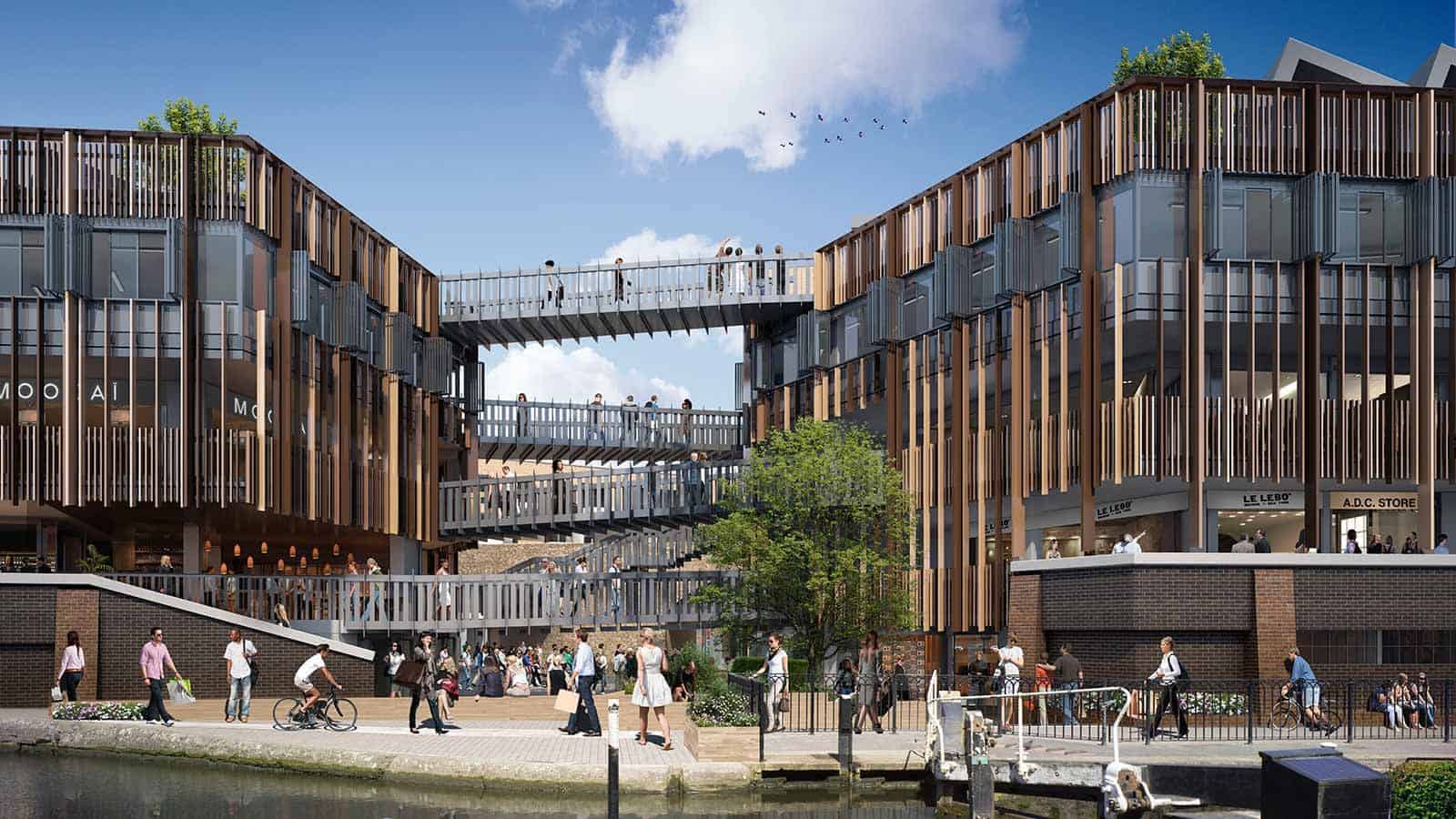 TES were awarded the contract for LV distribution for the regeneration scheme. The Contract Works included:

For the full details of this project – please see our Camden Lock Village Case Study.