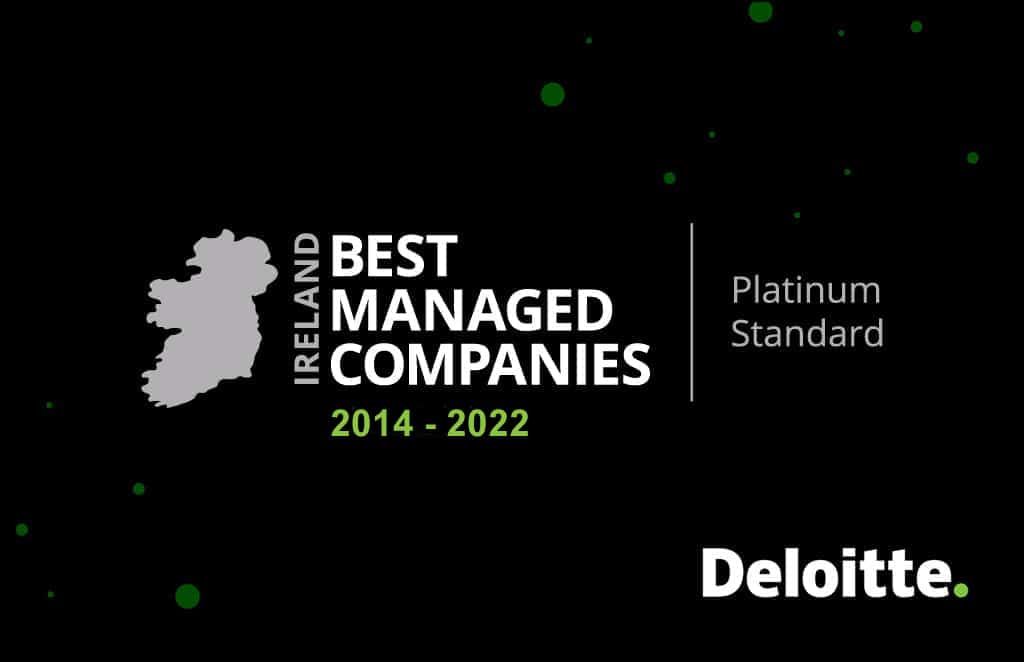 TES has been named as one of Ireland’s Best Managed companies for the ninth consecutive year at the Deloitte Best Managed Companies Awards, in association with Bank of Ireland. The company, which demonstrated superior business performance for the seventh year, was once again awarded Platinum status at a gala awards dinner in Dublin on 29th September. This is the first year where the awards programme returned as an in-person event following the pandemic and culminated with a gala awards ceremony at The Convention Centre Dublin.

Ireland’s Best Managed Companies Awards programme promotes and recognises excellence in Irish / Northern Irish owned and managed companies and is the only awards scheme on the island of Ireland that considers a business’ performance from every perspective. Entrants to the programme compete for the designation in a rigorous process that evaluates the calibre of their management abilities and practices in addition to the strategy, capability, innovation, culture and financial performance of their companies.

Commenting on the award TES Chairman Brian Taylor said “we take great pride in being recognised as one of Ireland’s Best Managed Companies. To receive the award 9 years in a row is testament to our staff who continue to show a real desire and commitment to achieve our goals and objectives.”

Brian Murphy, Lead Partner for Ireland’s Best Managed Companies Awards Programme at Deloitte Ireland said: “Year-on-year we’re impressed by the businesses that qualify and requalify for our Best Managed Companies Awards and in another uncertain year, the entries continued to raise the bar. Despite the challenges these businesses faced, the management teams of the winning companies have embraced new opportunities for innovation and growth, offering best-in-class products and services to their customers and retaining their competitive advantage in a world that is ever-changing.”

Harry Goddard, CEO, Deloitte Ireland and judging panel member commented: “A stand out from the judging process this year was the distinct focus of the Best Managed Companies on their local communities, despite their own international growth and ambition. Businesses have a vital role to play in our society. It was clear from the entries this year that they were having a positive impact not only on their own business, but also on the communities around them. I look forward to seeing how these businesses continue to invest, grow and contribute to our wider society.”

Nikki Canavan, Senior Director, Bank of Ireland Corporate Banking said: This has been quite a year for Irish businesses, a year that began in 2022 in the grip of a global health crisis, with businesses grappling to emerge from pandemic restrictions being met almost immediately by new challenges, the global equilibrium rocked by Russia’s invasion of Ukraine, rapid inflationary pressure, tightening labour markets, not to mention, the almost forgotten, but prevailing Brexit tailwinds. The performance of these Best Managed Companies throughout the pandemic and these more recent headwinds is a testament to the energy, resilience and skills of their respective management teams and staff who have all been resolutely tested in ways we could not have predicted over the last few years. Bank of Ireland has been delighted to be able to support them through this year, as their Bank in many cases and also through our Coaches on the BMC programme”