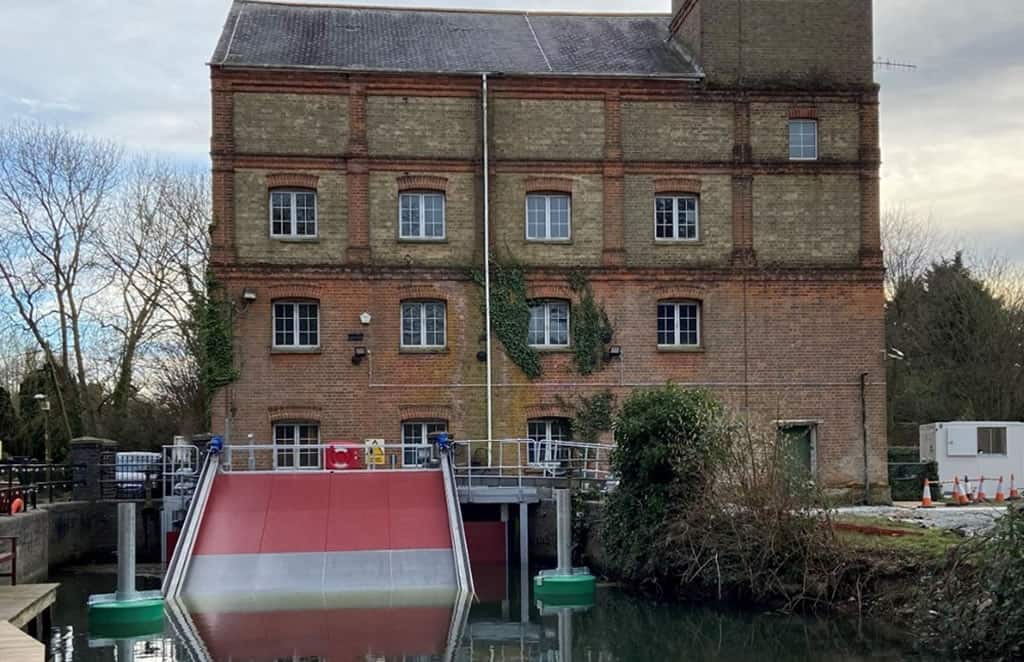 TES have recently completed a project to install a fine screening system at Langford Mill to prevent eel entrapment within the pumping system and to ensure compliance with the Eels (England and Wales) Regulations 2009. The TES provided solution saw the installation of specialist, off-site manufactured ‘Eco-Screen’ that sits in front of the intake allowing water to filter through the fine mesh panels to the pump without entrapping eels and other fish.

The canal system was established in the late 18th Century, with some of the bricks of the mill building having 1805 dated graffiti engravings. The mill building is reported to have burnt down late 19th century, with the water company building the nearby Langford WTW in 1925-27 with the mill intake understood to have been in use for its current function, of providing water to the works, since then.

In designing the solution TES had to ensure compliance with Eels Regulations with a key consideration being the speed at which the water engages with the screen (approach velocity). This needed to be low enough to enable eels and fish to swim away rather than being drawn towards the screen and unable to escape. In order to achieve the correct approach velocity a screen with a large surface area was required.

TES provided a custom manufactured screen to suit the specific Langford Mill requirements, which included an automatic cleaning operation to remove debris to a trough with a wash water system to flush the debris into a catchment trolley.

Throughout the project delivery the project team worked closely with the Fisheries team from the Environment Agency to ensure that fish were protected throughout the construction process with water oxygen levels constantly monitored. The off-site manufacturing approach ensured that minimal disruption occurred on site and that fish protection was maintained throughout.

As part of the project TES provided the following items;

TES were recently awarded the Workplace Health & Wellbeing Recognition Award by @nichstweet. The award was presented as recognition of the company’s efforts in supporting the health & wellbeing of staff in the workplace.

This week marks the signing of another Major Framework for FaCT3. As the new year begins, FaCT3 celebrate being reappointed as a Framework Partner of Irish Water.
https://www.tesgroup.com/fact3-sign-major-irish-water-framework/

Always on the lookout for innovative practice and new technologies, TES have this past year implemented QR coding as part of the company’s internal quality strategy.